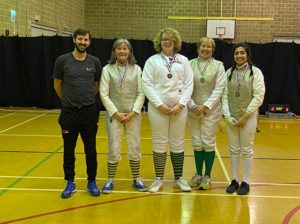 Congratulations to the medalists in the 2018 Men’s Epee Club Championships.

Congratulations to the medalists in the 2017/18 Club Sabre Championships.

Gravesham Fencing Club members Holly Snellin and Joe Joyner competed at the 2018 Bexley Open, both winning 1st place in their respective competitions!! Here is Holly’s story of the day:

On 2nd June I competed at the Bexley Open. I had won the last Bexley Open in 2016 so was fencing to try to retain the cup.

There were 2 rounds of poules with 5 matches in each. In each poule I won 4 out of 5 fights which put me in a good position for the DE’s.
I had a bye for the first round of DE’s putting me in the last 8 & fighting for a place in the last 4.

I won my first fight comfortably & then had a challenging 2nd fight to get in the final. It was a close fight with me eventually winning 15-13.
The final was another close match. In the third period it was 14-14 with a very tense final point. I eventually won 15-14 after a very tough fight.

Joe also had a good day. He hadn’t done much fencing in the last 6 months as he had been travelling overseas but thus didn’t seem to have done him any harm – winning the men’s competition without breaking into a sweat.

Congratulations to the Medallists in the 2017 Women and Men’s Foil Championships!

Congratulations to Holly Snellin on finishing 10th in the U23 National Epee Championships.

Holly was unbeaten and ranked 2nd after the 1st round poulesdefeated in DE by the Competition winner.

Daniel Juras won the U11 Foil at the Royal Stennick Cup in November.

END_OF_DOCUMENT_TOKEN_TO_BE_REPLACED

This season Gravesham Fencing Club member Holly Snellin’s fencing journey has taken her to Belgrade and Estonia to represent Great Britain. Here is her report:

I was recently lucky enough to fence at a Satellite competition in Belgrade & World Cup in Tallinn.

Belgrade was a very good competition for my first International at a senior level. I fenced okay in the poule so was able to fence in a DE. I fenced okay, however nerves & excitement overcame me & I made many mistakes. I was knocked out by a Romanian fencer & didn’t progress any further.

Tallinn was a very eye opening experience! This competition was of an extremely high standard where I was brushing shoulders with Olympic medalists!
I went to this competition knowing the standard was incredible, so I tried to use it as almost a training competition where I could put into practice what I had been learning in lessons.
I thoroughly enjoyed the experience & learnt huge amounts! This competition has made me more determined to train even harder!